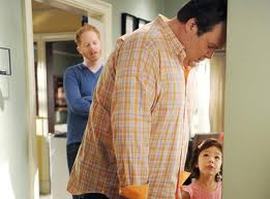 Modern Family challenges the stereotype of gay men not being able to stay in long-lasting committed relationships through Cam and Mitchell. It is clear they are in love throughout the show. Although they are often bickering to each other or not agreeing on something, there commitment is never questioned. They have a loving and grounded relationship that is really made obvious through their adoption of Lily. Cam and Mitchell are very supportive of each other.

In Season 1 Episode 17, Cam tells Mitchell to review his priorities because he is working a lot and does not have extra to be with the family. Mitchell decides to stand up to his boss and quit, but immediately starts to have regrets on his way home. He is nervous about the future of the family. After some disagreement, Cam understands that Mitchell made the right decision so they can all spend more time together. They joke around with each other as they are having a celebratory glass of wine. Mitchell says, "Let's just drink the cheap stuff, because we may have to sell that bottle." 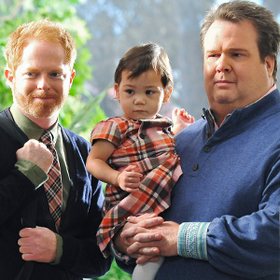 Mitchell, adopted child Lily, and Cam
Probably the biggest way Modern Family challenges the gay stereotype is through the adoption of Lily. Our society does not see men as maternal people who are capable of raising a child on their own without a woman figure. But, in the show they make it obvious that Mitchell and Cam are very good parents. The fact that they are so open about adoption on the show makes it clear they are challenging society's views on gay men. And of course they add in some humor as Mitchell and Cam are telling the viewers about adopting a second child:

Mitchell: We're interviewing prospective mothers for adoption.
Cam: It's quite an ordeal. You want to look good, make a good first impression. It's kind of like going on a first date.
Mitchell: Actually, it's the opposite of a first date. You don't want to have sex, but you do want to have a baby. (Season 3, Episode 12) 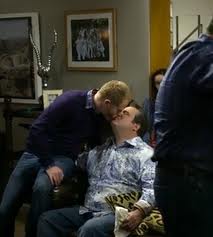 There was a lot of controversy because viewers of Modern Family said that Cam and Mitchell were never intimate. So once a Facebook group was made about it, the writers of the show announced that they already had an episode of them kissing on the way. Once the episode aired, some people said it was too short and not really the main focus. However, most though the situation was handled perfectly. The episode explained that Mitchell did not like PDA so that's why Cam and Mitchell are not intimate together.

Cam as a Football Player 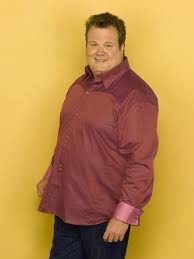 As feminine as Cam may be, he brags about how he played football when he was growing up. He always says that he was very good at it. Although he does love musicals, he still is a big fan of football and watches the games. Cam also grew up on a farm. He had to work hard and get dirty which shows that he does have a masculine side to him.