So What Does This Mean?

Although sometimes Modern Family reinforces the gay stereotype, I think it's really important to have gay couples in the media. It makes gay relationships more visible, which hopefully helps people to be more open minded. The fact that Cam and Mitchell have a child together also makes the show better for the LGBTQ community. It shows that men can be maternal and are more than capable of raising a child.

In addition, I think it's important for people to be aware and educated about what stereotypes are and what they mean. According to the Merriam-Webster Dictionary, a stereotype is a standardized mental picture that is held in common by members of a group and that represents an oversimplified opinion, prejudiced attitude, or uncritical judgment. It's important to know that stereotypes are just opinions, attitudes, and judgements and not everyone fits in to this model that the media creates. 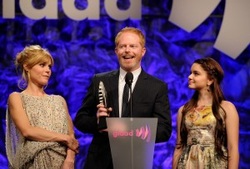 Many critics and organizations seem to think Modern Family is a great show, especially for the incorporation of a gay couple. For example, The Gay & Lesbian Alliance Against Defamation (GLAAD) says on their website that "For over 25 years, GLAAD has worked with news, entertainment and social media to bring culture-changing stories of LGBT people into millions of homes and workplaces every day." In 2011, Modern Family tied with Glee for the Outstanding Comedy Series at the Annual GLAAD Media Awards. This definitely shows that they think the relationship between Cam and Mitchell is very good for the media and public eye.