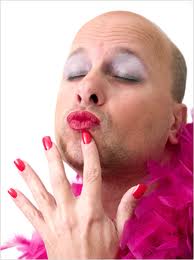 Our society has portrayed gay men as very flamboyant and feminine. The media shows them to be very involved in fashion or decorating and not really care about sports. Instead, they are viewed to love Broadway shows and musicals. They often have a feminine voice and do not really show any masculine attributes. They are obsessed with their appearances and bodies. The usual night out for a gay man is clubbing at gay bars with drugs and alcohol.

Many gay men are not shown to have long-lasting relationships. They are seen as promiscuous and only care about sex. Since they are seen as promiscuous, it is a stereotype that they are not involved in "real" committed relationships. People also assume that in homosexual relationships one must be the "female" (passive) role and the other must be the "male" (dominant) role. The stereotypes basically say that all gay men are the same and there is no diversity between them.